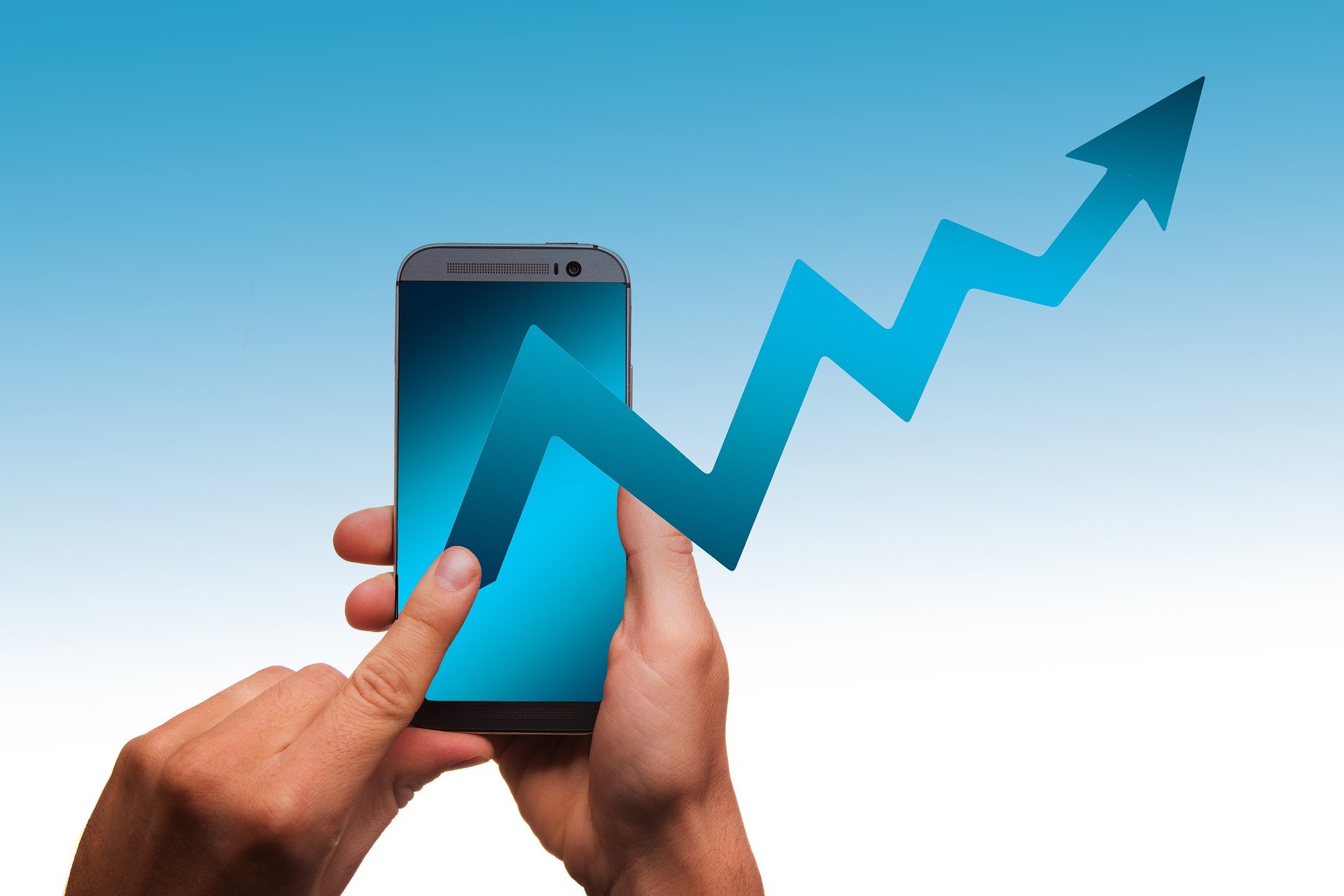 With a heavy dose of innovation and disruption, agriculture technology, or agtech, has transformed the operational processes and expectations of the agriculture industry. Like any other industry that’s transformed by tech, the agriculture space must keep up with changing work styles, updates in equipment and mobile devices, and customers who demand speedy results.

Unlike other industries, however, agriculture also has to contend with using such technology to radically transform the way food is produced, population is sustained, and environment is saved.

Luckily, AgTech is taking cues from the innovation within the medical industry. 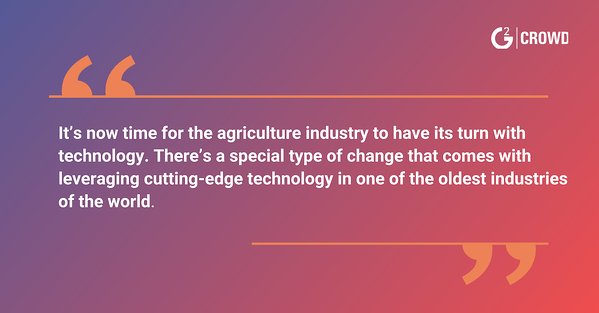 The health care industry has long been stereotyped as difficult to change. It’s seen as stuck in its legacy systems, and frozen with the fear of investing too many dollars into unhelpful and frustratingly complicated software and platforms. However, thanks to significant regulations and legislation in recent years, health care was forced to change, and change quickly. Now, vendors are nearly tripping over themselves, offering easy-to-use and cloud-based solutions that optimize the overall or specific portions of medical practices.

It’s now time for the agriculture industry to have its turn with technology. Innovation has already come about within the ag industry (just look at the evolution of crop modification), but there’s a special type of change that comes with leveraging cutting-edge technology in one of the oldest industries in the world. For example, biotech has already made waves within the medical industry. If biotech can edit human DNA to combat diseases, then it’s a sensible leap to apply that same technology toward the improvement of crop yields and fighting of crop-devastating diseases. 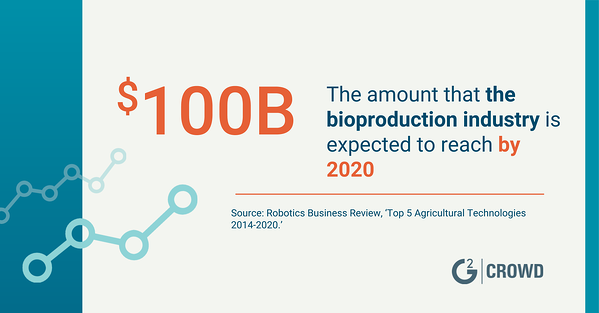 In 2019 (and beyond), synthetic biology will become the norm in agtech. Let’s just take a look at the numbers: By 2020, the bioproduction industry is expected to reach $100 billion.

Bioproduction’s potential impact on farming is staggering; bioproduction adds on to existing technologies such as GMOs to produce a variety of foods at lower costs. Which makes sense; according to Statista: “Over the last decade, the issue of genetic engineering has increasingly been on the agenda. The United States has by far the highest acreage of genetically modified crops worldwide. Some crops have a very high share of GM crops per species. For example in 2016, some 94% of all soybeans planted in the U.S. were genetically modified so as to be herbicide tolerant.”

Two trends appeared during our research of the trends in agtech.

Prediction: Millennials will drive 75% of the technological change in the farming industry

Frustratingly, this particular generation has been lambasted about their supposedly irregular and unconventional methods of handling work and life. However, what cannot be ignored is millennials’ penchant and dependence on innovative technology in all aspects of their lives. 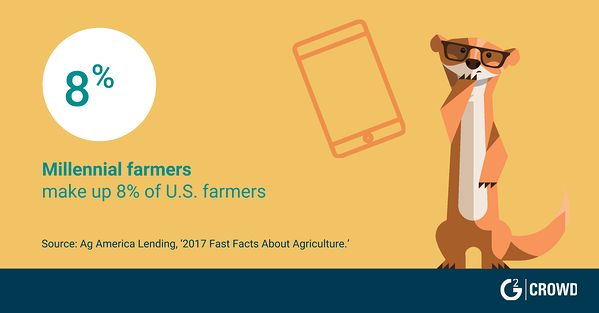 Using smartphones, aggregating and analyzing data, and coming up with effective shortcuts to make tasks more efficient—these are ingrained millennial instincts. This generation won’t think twice about leveraging existing or innovating new technology to modernize farming. Additionally, for better or for worse, millennials are used to constant change and they prickle against stagnancy.

Farmers are no longer necessarily generational farmers who farm because it’s what their grandparents and parents did. The number of students who graduate college with an agricultural degree and the number of colleges that are expanding their agricultural programming are both upwardly trending.

According to the Ag America Lending’s 2017 Fast Facts About Agriculture informational page, millennial farmers make up 8% of U.S. farmers. (More than 20%of all farmers, regardless of age, are “beginning farmers,” meaning farmers that have fewer than 10 years of farming business under their belt.) Couple that with technologically driven statistics and we can already see the impact of millennial mindset on the ag industry. Think robotics, drones, and sensors; according to Statista, in 2016, U.S. farms spent some $12.6 billion on tractors and self-propelled farm machinery.” (Emphasis our own)

Agricultural robots are the perfect example of rapidly developing technology intersecting the agriculture industry with creative and innovative results. Ag robots make possible the automation of labor-intensive crop production management, as well as efficient data collection of the growth and development of those crops. At the University of Illinois, genomic biology scientists have developed and are fine-tuning the prototype of a semi-autonomous robot, thanks to funding from the U.S. Department of Energy. The robot is designed to assess environmental conditions and aggregate phenotypic data.

In a similar vein, the CEO of Charter Software and the Director of Operations of HBS Systems discussed the future of agriculture equipment dealers for Farm Equipment and posited that while the ag industry is currently “playing catch up…in five years from now you’ll see connectivity.”

That means connectivity between, for example, IoT-connected devices and RFID sensors that result in lots of data and knowledge share. That catching up will be led by millennials and their technologically driven tendencies.

Prediction: 15% of small farms will leverage precision ag technology in the next year

There’s good news, though! Agtech has the potential to revolutionize farm operations—and interestingly, small farm operations in particular. Agtech’s goal is to simplify and make more affordable the technology necessary to revamp those operations; innovators within the agtech space can do that better by appealing to small farm owners rather than giant, enterprise farms. Small farms, in a similar way to small businesses, can pivot faster and evolve more quickly than enterprise farms that most likely have more strict oversight. 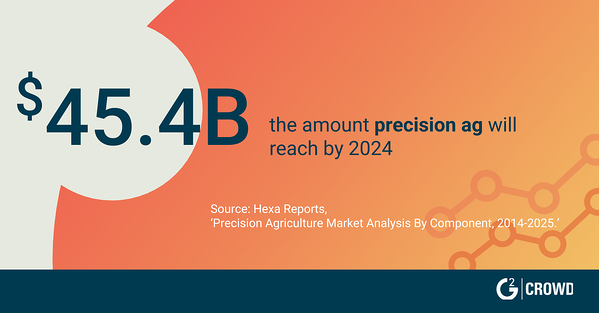 According to Hexa Reports, precision agriculture, or precision ag, will reach $43.4 billion by 2024. (Business Wire reports that the CAGR (compound annual growth rate) of that prediction is 14 percent.) GPS, sensors, UAV drones, and semi/autonomous vehicles are just some examples of precision ag technology software that help farmers and farms become more controlled and, well, precise when it comes to crop and livestock management.

There’s a ton of technology in existence that small farmers and farmers can latch on to, to optimize farm operations and output. It’s all about the increase in availability of hardware and software to farmers. Agtech hardware includes: robotics, sensors, drones; software facilitates data processing abilities that allows farmers to collect, interpret, and understand everything that’s happening to and on their farms. Those kinds of hardware and software allows farmers to implement real-time changes. 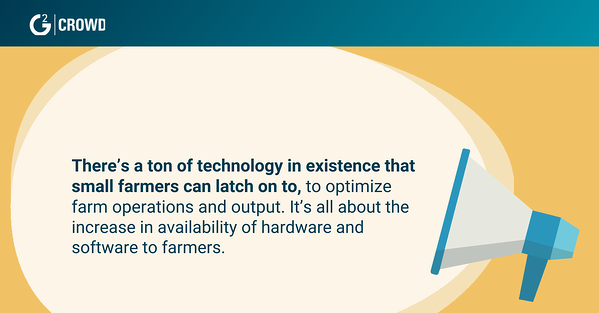 Crop sensors, for one, are a significant piece of technology that can connect robots, regardless of initial design, to precision ag. By leveraging data collected from sensors, farmers can identify proper resource (i.e., chemicals) allocation. For example, farmers can look at sensor data to identify which nutrients their crops are low or deficient in, and then use precision ag tech to apply only X amount of nutrient to specific Y part of the plant.

In fact, it’s not a matter of convincing farmers that they have operational problems that need to be identified or addressed. Farmers are aware of any gaps or inefficiencies. The better question to ask is: “How (or when) can we mobilize to implement technology to change current processes?” It’s very likely that by 2024, the majority, if not all, of small farms will leverage precision ag or any other innovative agtech. However, for the next few years, adoption of UAV drones and IoT-integrated devices are totally dependent on whether the actual equipment can deliver on the promises of the concept.

Luckily, we’re headed in the right direction. Agricultural robots are a highly “nascent market,” so says Robotics Business Review, disrupting current farming processes and expectations, with the intention of combating “escalating labor costs or farm overhead.” The only blocker to more widespread adoption of such helpful technology is cost, both on the side of technological funding and on the side of vendors who depend on specific technology to provide actionable intelligence for farmers.